I’ve never done a book review before and this one is outside my usual genre of reading, but I felt compelled to write about it.

Constance Hall has been creating quite a stir on the internet with her apologetically truthful posts about womanhood and parenting, as well as her movement towards the Queenhood of all women. And now she’s released an autobiography called LIKE A QUEEN which details her life, her family and her passions as a writer.

Constance is raw and flawed in a way that we can all relate to. She’s also incredibly funny. It’s hard not to read her stories without pissing yourself laughing (even more likely if you suffer postnatal incontinence). She talks of her children and the struggles – and triumphs – of being a mother four times over as well as the juggling (at almost a pro level) that is required to get them all through the day alive. She spills on her imperfect marriage and how she didn’t understand what love was until it was almost too late.

Her experiences are relatable, from her pretty regular (what is regular anyway?), though still fascinating upbringing, to her suffering of mummy guilt and how she discovered that this makes you a good parent (because shit and abusive parents wont suffer such things).

Did I mention that Con is fucking hilarious? She doesn’t hold back, detailing everything from the dreaded after-birth poo to the fully sexy (but not so sexy) romps that are an inevitable part of married life with kids. She explains the disappointment of husbands who are pretty fucking useless, but why we should love them anyway for giving the art of husbanding a red hot crack. She also gives zero fucks about having a clean house (a woman after my own heart) in favour of loving the fuck out of your kids.

But the best thing about this book is her mission for self empowerment and the empowerment of other women. Con has had some lows in her life, and she’s had her highs and through it all she’s discovered what it means to have self worth, to love yourself as you are and to love all other Queens as they are, despite whether their crowns are shiny or jagged, or have yet to be discovered. If you love yourself, Con says, then your children will grow to love themselves by way of your example. Others will gravitate to you because of your beautiful Queenly glow.

I’ve lately found myself following a few feminist pages on Facebook. Despite what some haters would have you believe, feminism can come in all shapes and sizes, with many missions and goals for the betterment of women all over the world. From Clementine Ford who unashamedly calls out the haters and the fucking piss weaks, who cops the blows on the chin in her quest to eradicate the ridiculous notions of the ‘not all men’ movements and to out those who partake in ‘harmless’ locker room banter to the Emma Watsons of the world who strive for equality on a global stage by raising awareness that women’s rights are not just a women’s issue. I admire them all for their bravery to cop flack to better the world and continue the fight for women everywhere.

Con is no different. She calls for her Queens to band together, to break free of the habits we’ve fallen into where we as women tear each other to shreds for the decisions we have to make. Whether we’re great at something, or struggling just to get through each day, we should offer a smile and a hand to our fellow Queens. Tell them we care and empower them to hold their heads a little bit higher. 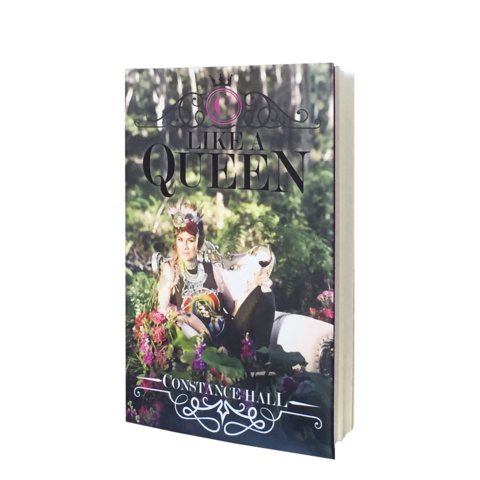 Like a Queen is a must read for all women, whether they are young Queens trying to make their way in the world, or seasoned Queens who want to reminisce on those days. It’s a book for mummies of one, mummies of five or those soon to be mumma bears. It’s a book for wives, sisters and daughters. It’s a book for anyone who wants to join the Queenhood of awesome self empowerment and the unity of women across the world.

And if you don’t want to read the book, at least follow Constance’s Facebook page. She’ll have you in fucking stitches with her antics.